Friday, beginning at 2 pm, vendors open their booths, dogs compete in a “K9s Got Talent” event at 6 pm,  and, finally, Leah & the Aviators, a Key Largo group, play live on the main stage, starting at 7:30 pm.

Events throughout the weekend include a Doggie Fun Zone with a combined agility and obstacle course. Dogs up for adoption show off their ‘swag’ during a “Rescue Me Mutt Strut” hoping to land a ‘fur-ever’  home. An animal adoption village hosts local and breed-specific animal rescue groups.

As in the past, proceeds benefit MarrVelous Pet Rescues & Adoptions, an nonprofit dedicated to pet fostering, adoption, education and wellness, and raising pet population awareness.

To volunteer, go here, to view the schedule, then contact the volunteer coordinator Lou Sivley (lindsay.sivley@yahoo.com). Please include your name, phone number, email address and dates/times that you are available to volunteer.

On March 6, 2010 MarrVelous Pet Rescues held their first annual WoofStock, A Day of Peace, Paws & Music. They had over 5,000 people from around the world and over 1,000 dogs. It was held at Founders Park in Islamorada. And MarrVelous along with the 5 other rescue groups, adopted out 24 dogs to their ‘fur-ever’ homes.

The event is described as “A Day of Peace, Paws & Music.” In 2014 the event had over 1000 dogs and approximately 5000 people from all over the world. The purpose of the event is to raise awareness of pet overpopulation and to adopt out dogs (and a few cats). People bring their dogs to run on the track chasing an electronic “rabbit,” dive from a platform into water, sit in the shade tent to enjoy the music or just to look around at all the booths.

Over the years, the Keys to Peace booth has displayed our Peace Bells and in 2014 we also had decorated rain barrels, a fundraiser for Coral Shores High School’s “Be The Change” group. For the first year, 2011, Peace Bell artists were at our booth painting their own bells. 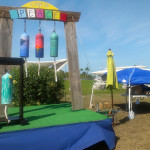